For Kdrama lovers, 2021 must be a fun year, right? How are you not? From the beginning of 2021, there are so many Korean dramas that are very interesting to watch. For Millers who are confused about which drama to watch, this review may be able to help Millers to find an interesting drama option to watch.

The drama that I will review is titled Vincenzo. This Vincenzo drama tells the story of a mafia lawyer and Consigliere who grew up in Italy named Vincenzo Cassano. One day he returned to his hometown of
South Korea to avoid conflicts between mafias in Italy. Arriving in South Korea, initially he only aimed to hide temporarily and target the gold hoard hidden in a plaza building, but in the end he had to deal with one
big company that was no less evil than the mafia named Babel. In South Korea he also met and
became the partner of a lawyer named Hong ChaYoung. The two of them together defeat the criminals
and fight for justice in their own way.

Actually, this rating is not always a benchmark for judging whether a drama is good or not, but it is undeniable that the rating and the number of viewers obtained by Vincenzo’s drama can be evidence of the
popularity of this drama. 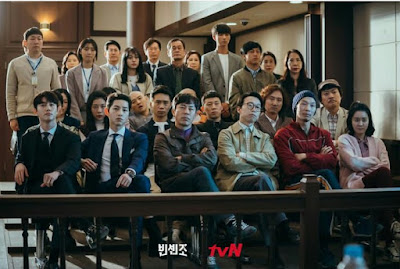 Beyond Evil. You can see how dark and mysterious this
drama poster is

Eitss, I was wrong, hehe. Even though this drama is a thriller genre, this drama is also equipped with
comedy which is enough to make the audience feel happy when watching this drama.

For those of you who don’t know, the writer of this play is the same as the drama The Fiery Priest . This drama is also very good and interesting. Well, for Millers who have watched this drama, you must know how interesting and unique the drama The Fiery Priest is . With the same author, so it’s not surprising that there are similarities in the characterization of the main characters and character development in these two
dramas.

Both of these dramas take on the main male character who has trauma and a dark past. The two main characters also have strong characters and also turn out to be better people.

The unique and good drama written by Writer Park Jae-Bum is that it is so solid and slick in composing 2 different genres, Thriller and Comedy. Millers will really feel the gripping effect when the thriller scene and will feel very funny and happy when the comedy scene. So, Millers who like the Thriller Comedy genre will definitely like this one drama.

7 Strengths and interesting things Vincenzo drama:
The plot is solid, intense, and organized so that the audience can easily understand the storyline, will not feel bored and will remain curious until the last episode.

Maybe the plot twist of this drama may not be too much or wow, but the character development of the actors from the main cast to the supporting cast will make the audience quite surprised and curious in each episode.

Famous actors and actresses. Starting from Main Cast to Supporting Cast, the majority are famous actresses/actors in South Korea and are seniors in the drama/film field. So their acting certainly will not disappoint.