The story of Mike Tyson and Cus D’Amato meeting to become the cruelest heavyweight boxer on planet earth. And, Mike Tyson’s ritual of controlling lust in the locker room before the fight turned out to be an outlet for his explosive energy so as not to kill his enemies in the ring to become the other side of Iron Mike.

Gonzalez dared to say that after he witnessed the vent of anger, sadness, and inner torment of Mike Tyson who was then 20 years old. Tyson’s excessive energy was so terrible when he crushed Trevor Berbick in the second round. 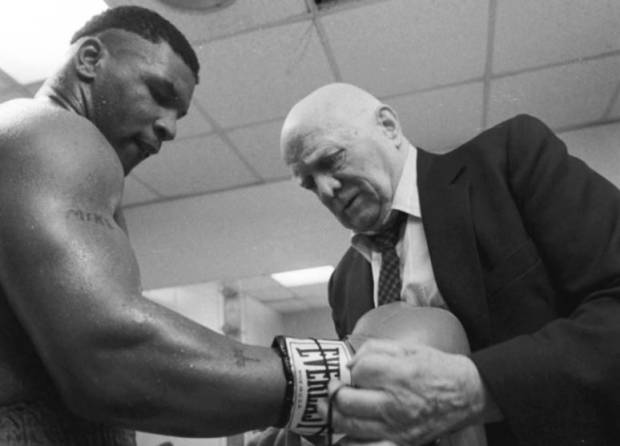 After that, Tyson transformed into the most sadistic boxer on earth. For fans of boxing world in the 80s, very familiar with Tyon’s behavior in the ring. Cruel, without a smile, brutally beat his enemy in the ring. The dark side of Mike Tyson in his teenage years until the death of Cus D’Amato was a factor in how his mental state was out of control and earned him the nickname The Baddest Man on the planet.

Mike Tyson was coached by Cus D’Amato, his adoptive parents and coach.

The character of Cus D’Amato, who became Tyson’s legal guardian after serving his sentence in juvenile prison, with his father, guided Tyson from being labeled a street criminal to become a great boxer in the future. However, a year before history was made against Trevor Berbick, D’Amato died. Well, the departure of D’Amato left Mike Tyson mentally shaken.

“Mike used to cry before fighting. He had an anxiety problem where he would get frustrated with anxiety because he didn’t feel good enough or didn’t want to mess it up,” Gonzalez said.

“He was never able to recover from the loss of Cus, because he found someone special who believed in him and was saved from hell. He took it out on everyone. That’s why he walked into the ring with a bang when he beat Berbick.”

Mike Tyson’s ruthlessness in the ring earned him the nickname The Baddest Man on the Planet.

Cus D’Amato coached Tyson during the day, encouraging him to build his fitness and making him study boxing history in the attic of his home in Catskill, New York. “It was a love story. Mike was afraid that if he messed this up, he would either go back to his old neighborhood or be locked up. Cus was the only person he could trust. He would yell at him, and Mike would respectfully bow his head and say, yes sir, no sir.”

As a teenager, Tyson grew up with a mother tormented by addiction problems in a rundown apartment in Brownsville. While serving his sentence at the Tryon School for Boys, a now closed youth facility, former boxer Bobby Stewart, channeled his energies into boxing and later introduced Tyson to D’Amato.

Tyson’s first real home and family experience came when D’Amato and his wife Camille Ewald moved him into their 14 bedroom home. ”Mike felt having the keys to the house was a big deal, because he had never felt security like that before,” Gonzalez said.

“Camille will cook for her and we will all eat together, this is the first time she feels normal. We take it for granted,

“He always said I didn’t trust white people like me. He had been built one way before this – rob chains, get beaten, live in worse human conditions and start over.”

“For the first time he felt genuine love from Cus. and Camille. It was an unforgettable experience seeing him come out of that shell.”

After D’Amato died, Tyson often returned to his old home despite moving out. He liked to sleep in the attic of the house. He held onto that love for as long as he could,” Gonzalez said.