Entering the beginning of 2019, the production house Columbia Pictures released a horror- thriller genre film entitled Escape Room . The film, directed by Adam Robitel ( Insidious: The Last Key), is scheduled to be released in Indonesian cinemas on January 11, 2019. And before you decide to watch this film in theaters, it never hurts to listen first to the following film review!

Film Synopsis
As the title implies, Escape Room tells the story of a room full of puzzles that require the participants to look for clues in order to escape from the place. With different backgrounds, six people consisting of Amanda (Deborah Ann Woll), Zoey (Taylor Russell), Ben, (Logan Miller), Jason (Jay Ellis), Danny (Nik Dodani), and Mike (Tyler Labine). invitation to participate in the Escape Room game. The selection of these six players began with the puzzle box prizes they received and the names of those closest to the participants were written as senders. In addition to adventures in the Escape Room, there is also a prize of $10,000 that makes participants interested in participating in this game and coming out as winners.

Peel each character
What makes this Escape Room movie interesting is the presence of each player who has a different character, so you can judge and imagine which character suits you if you are in the game. 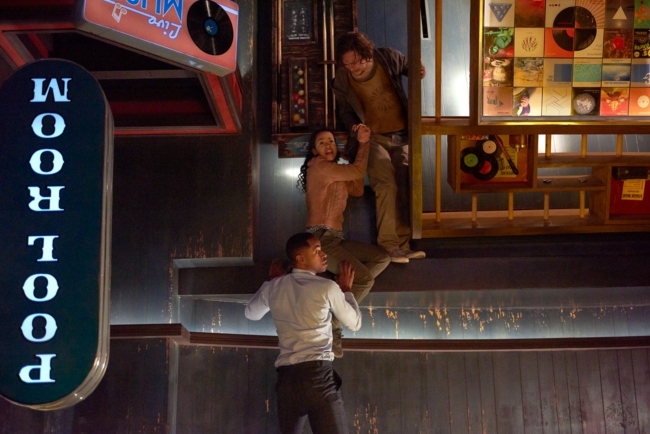 Like the character Zoey, a shy and aloof science student, with the background of her story being a survivor of a plane crash that killed her mother. Then there is Jason, a finance executive with a charismatic, competitive, and egocentric character, where he always wears a “mask” to block his bad past. Then there is Ben, a young man who has lost his way after being traumatized by a horrific car accident and made him lose his friends. Amanda, an army soldier who falls victim to an explosion while on duty and lives a life of ongoing trauma. Mike, the oldest participant who is a bus driver is also a loving father. And finally Danny’s character, a gamer who always looks enthusiastic to finish the Escape Room game.

Quite entertaining even though the storyline feels rushed
Similar to survival-themed films such as Saw and Hostel , the Escape room film is dominated by the adventures of the participants to successfully escape various deadly games that have been provided by the creator. The game begins when the participants gather in the waiting room, which immediately turns into their first playing arena. From this scene, the story continues to various other games. And as the story progresses, the audience will realize that cooperation is no longer the priority, but each other’s ego to get away from this game. Throughout this film, there are seven rooms that they have to go through where all rooms are born from their respective characters that match the backgrounds of the participants.

Overall, Escape Room is quite entertaining, with a variety of games presented, but I feel that this film has a very fast plot, making it difficult for the audience to enjoy or get involved in the game. And because it has a teenage audience rate, the Escape Room movie is safe and doesn’t have disturbing sadistic scenes. For those of you who can’t stand watching movies like Saw, then Escape Room can be another interesting alternative. And vice versa, for those of you who like films full of suspense with blood and sadistic scenes, of course the Escape Room movie will be less kicking.or even feel bear. With a duration of 95 minutes, actually Escape Room could be a very satisfying film, if only the storyline was not rushed. Well, for those of you who are curious to follow the story of this film, Escape Room will air on January 11, 2019 in various cinemas in the country.

Not satisfied with just watching and want to experience the adventure of solving puzzles right away? You can feel it by visiting the Pandora Experience which is located at Alam Sutera Mall and Ciputra Mall. For those of you who like to solve puzzles using logic, strategy, and teamwork, this Pandora Experience will challenge you to solve and win the game. Interested in trying it?