Initially the Korean Drama – Taxi Driver was not a list that I wanted to watch. So the story is that I got a premium for free watching for 1 month from June, and in the end I chose what to do so I don’t regret it if I don’t watch it. Ha ha. Don’t want to lose. Finally, I watched it quickly, skipping the movies that I watched, starting with World of the Married, Penthouse I and I was curious to finally watch the Taxi Driver movie.

Actor Lee Je Hoon at first used to watch it too. The story is exciting, the action is tense while watching it, but the most important thing is the story of solving problems. Kim Do Ki often argues with Mbak Prosecutor Kang Hana.

The story of Kim Do Ki (played by Lee Je Hoon) who once worked in the military and the 707th special mission force then works for Rainbow Taxi. Taxi Driver is a “hero” figure who avenges the wronged people through taxi services. So this is like a kind of service for revenge. Lee Jee Hon performed well in portraying the action genre and cool acting skills.

The excitement from the initial scene of meeting Kim Do Ki and Kang Hana (played by Esom) is full of quarrels. I just met and had a fight. It’s the most suitable. 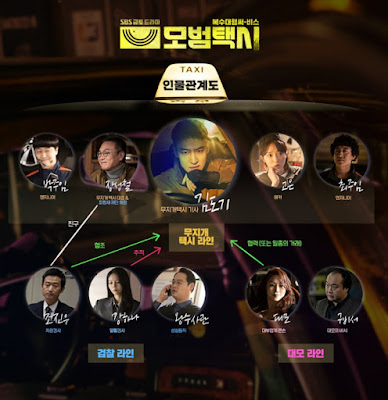 After a while, there are feelings too, like Kim Do Ki and Kang Hana. only Kang Hana didn’t show it. Kim Do Ki too.

In the movie Taxi Driver, he likes the character Kang Hana the most. He is a firm prosecutor and defends the weak. Just like Kim Do Ki. Once there was a lawyer who forbade him to walk in front of U Data’s office.

He didn’t flinch and said, “Mr. Cho has made it clear to me. He said to show respect. So please don’t bother him because of this. Everything that happens after that is my own decision.”

The dialogue that followed was “Yes sir, this brat will go now.” Daebak!

I also like the scene of Kang Hana’s subordinates and her boss, the Deputy Head of the Prosecutor’s Office, Yoo Seung Mok (played by Yoo Seung Mok) sorry, so I know that the world of work is not as beautiful as it seems. Kang Hana is very patient with a boss who likes to be angry in his room and can be heard outside. Haha until Mr. Jang was surprised that Kang Hana was stressed and had a boss like that.

Don’t chase money, hold on and stay here till the end. If you want to survive here, you can’t be crushed. The bamboo tree will fall when there is a strong wind, but the grass always stands up no matter how hard the wind blows. You can act like a bamboo tree, but your heart must be like grass, rise and rise again. Hold on to the end. Don’t be crushed. -Mr. Wang

The saddest scene is when Mr. Wang, Kang Hana’s co-worker is killed and Hana takes revenge and finally asks Kim Do Ki for help to catch the criminal who killed Mr. Wang.

Kim Do Ki has also begun to empathize with Kang Hana when Kang Hana is sad that Mr. Wang died, Kim Do Ki waits outside until Kang Hana comes out. This is also the scene that Esom likes when Kang Hana asks Kim Do Ki for help to get revenge on Gu Young Tae.

This film broadcast by SBS from the beginning of the most interesting story when handling the U Data case and often causing misunderstandings between Kang Hana and Kim Do Ki. Basically, Kim Do Ki thought that Kang Hana threw away the U Data file, even though it was Kang Hana’s boss who forbade Kang Hana to investigate the U Data case. Hahaha.

Then number 1 was also when Kim Do Ki was already battered by Goo Seok Tae who turned out to be the twins that killed Mr. Wang and the organ harvesting case, after fighting all out then Do Ki gave Baek Sung Mi to Kang Hana as if Kim Do Ki really trusted him. Kang Hannah. When Do Ki fell, it was really sad.

It’s also fun when Do Ki becomes a temporary teacher and teaches at a high school. Don’t worry about Do Ki being manipulated by his students. But it turns out that Do Ki is smarter, guys.. Wow, that’s really cool, until those who like bullying are clumsy and checkmate can’t do anything. Finally they were separated from the chairman who likes to be the “brain” of bullying and 2 of his other friends moved schools. It’s really good that the story is based on a true story. Hope there will be Taxi Driver Season 2 soon and it will be made. Yeay! Is it a full thriller genre like in Season 1 or is there a little romance genre? We’ll see later. I hope the action genre is like it is now.

Even though Kang Hana was fast so she could catch Kim Do Ki. And strangely enough, just right with Hana, Kim Do Ki fell many times, you know. First, right after the dinner meeting with their respective bosses, Do Ki fainted. Second, when he was exhausted after fighting all out and handing over to Baek Sung Mi, Hana was also helped. Third, right at the prosecutor’s office, Do Ki fell in shock to see his mother’s real killer telling the chronology of events.