It’s about Eun Dan Oh. The only daughter of a rich family. He had a congenital heart disease which, by a miracle, several operations saved him from death. The same disease that took his mother’s life.

It’s about a fantasy-romance genre drama . Eun Dan Oh is told as a character from a comic titled ” secret “. The role he believed to be the main. At first. But his interaction with the Dried Squid Fairy opened his eyes that he was just an extra.

The Secret Comic Universe was designed by the author for all extras to support the performance of the main characters: Oh Nam Joo and Yeo Joo Da who are told to have a romance. In accordance with their name, Namjoo in Korean is defined as the male lead. While Yeojoo is defined as the female lead.

Joo Da is told is a scholarship child who is constantly bullied, while Nam Joo is the son of the owner of an elite foundation where they attend school. The classic romance building between the rich and the poor.

In the “stage” Lee Do Hwa is positioned as the second lead male . The man who complements Nam Joo and Baek Kyung’s best friend who also loves Yeo Ju Da. Eun Dan Oh is positioned as a victim of unrequited love. His love for Baek Kyung did not bear fruit. Tragically it lasted for 10 years. Baek Kyung’s company runs into trouble and expects investment from Dan Oh’s father’s company. This business polemic further sharpens Baek Kyung’s rude behavior towards Dan Oh.

The principle understood by those who are aware of this comic world is: they must live their destiny in a “stage” situation. but in the “shadow” situation they are free to be themselves. Unfortunately the author is too detailed in designing the character of Dan Oh. This is what makes Dan Oh determined to change the storyline.

Dan Oh then meets a nameless extra. The figure he named Ha Roo. Ha Roo in Korean means day. Dan Oh believes Ha Roo can help him change the storyline because Ha Roo has changed his sad days to be different. And Oh wants to live, he wants to be happy. And he loves Ha Roo.

Ha Roo’s presence disrupts the storyline. Ha Roo is in danger of being removed from the story. But Ha Roo followed his heart. He also loves Dan Oh. Ha Roo also wants to live. Want to be happy. want to be with Dan Oh.

In the parallel universe , it turns out that Dan Oh and Ha Roo are the main characters in another comic titled “Flowers”. The existence of the Dried Squid Fairy is getting increasingly gray and it is also starting to make him suspicious: is he a story writer? 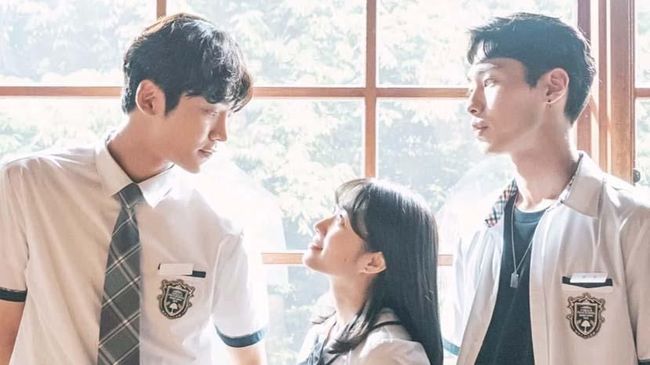 Most Viral Korean Drama This Week

Quoted from the coil, the drama that carries the webtoon story is considered to attract the attention of the audience through its storyline, unique concept, and unpredictable plot. The rating, which is said to have increased by 75% (according to Good Data Corporation) even beat the Korean drama rating “Vagabond” which is the most expensive drama production in Korean drama history.

The acting of Kim Hye Yoon and Ro Woon also invites admiration. How ceriwisnya And oh be offset with patience and cool by Ha Roo. A slick presentation that makes the audience baper.

An Eun Dan Oh is an adorable person with a strong character. Apart from Baek Kyung, he acts stupid and remains cheerful. Has a gentle nature but still tries to be happiness for those around him. And Oh sincerely live the destiny of the story. But do not surrender to the situation.

His warm interaction with Lee Do Hwa who is both able to realize the situation really gives the audience a “butterfly” effect. The effect of a small flap of wings that is believed to provoke a big wind of optimism that the storyline will change.

Maybe Eun Dan Oh is a reflection of all of us. Someone who initially thought he was the main character, but reality drowned out that hope. That it turns out that destiny puts us as extras for people who are “more” than us. But Dan Oh made the audience aware that we have the right to compose our own storyline.

The out-of-story discussion between Ha Roo, Lee Do Hwa, and Eun Dan Oh based on the “future” that Dan Oh saw was personal. That indeed in this world there are those who are too serious about their role in life and forget to be themselves.

The relatability of this drama seems to be the strongest magnet for its loyal audience. Totaling 32 episodes, it feels like the right mix of jagganim to introduce drama with a new concept. A fresh interesting drama with a cast of high school students who successfully made the audience aware that our life is to make ourselves happy. Not just “servants” or “supporters” for others.