The drama, which has been airing since last May, tells the story of Yoon Hyeon Jong (Kim Sang Kyung) who takes the opportunity to become a badminton coach at Haenam Middle School, which is located far from Seoul.

He moves in with his two children, Yoon Hae Kang (Tang Joon Sang) and Yoon Hae In (Ahn Se Bin).

With limited players, the badminton club intends to participate in regional tournaments after several years of absence. Yoon Hae Kang, who previously focused on playing baseball, was forced to join to complete the team.

Meanwhile, Ra Yeong Ja (Oh Na Ra) the coach of the women’s badminton team who is also in Haenam has a reliable student who has become a national athlete, Han Se Yoon (Lee Jae In).

This drama follows the journey of the two badminton teams to win the championship. 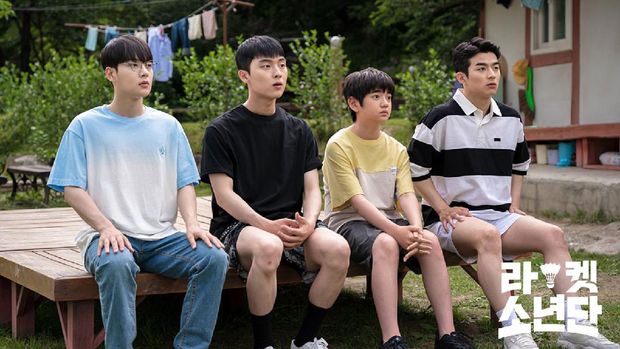 Raise Realistic Conflicts As They Are

Racket Boys drama does not discuss the intrigue and complicated conflicts in the story. This drama actually comes with realistic problems as they are with sports-themed packaging.

The audience can see the teenage-style conflict in Yoon Hae Kang and his friends, or the gloomy sports bureaucracy through the coaches’ comments without feeling like it’s exaggerated.

In addition, the audience was also presented with the problems of villagers facing people from the city. The point of view about the differences in life in the village and in the city which often becomes a polemic is also another realistic thing that appears in this drama.

Although light conflict is the strength of this drama, Racket Boys still feels a bit boring in some parts. Moreover, there are no memorable scenes or things in this drama that the audience can remember after the drama ends.

Had Reaped Controversy But Still Waiting
Racket Boys had created a scene during the screening of their fifth episode in early June.

In this episode, this drama alludes to the Indonesian fans and the facilities provided by Indonesia when welcoming Korean athletes.

Some of the dialogues of Coach Paeng’s character (Ahn Nae Sang) contain criticisms related to these two things which are considered insulting to Indonesia.

Rating R acket Boys in various movie sites was dropped and even got a scathing comments from netizens Indonesia.

Even so, this drama is still awaited for some Indonesian drama lovers. In Korea itself, Racket Boys’ viewing rating is still relatively safe and not small.

Good Drama But Easy To Forget
Overall Racket Boys is not a bad drama. This drama performed well in terms of the ranks of young players to veterans, in terms of stories, and also visuals.

However, this drama does not have anything so special to remember. The badminton theme that makes Racket Boys the first drama to discuss this sport also cannot help make this drama special.

Finally, the Korean drama Racket Boys is still worth watching because the story is light and realistic.

For sports fans, especially badminton, this drama is also quite representative of the portrait of the world of badminton and can be a new point of view for the audience.