Misaeng (Incomplete Life), one of the dramas whose storyline in my opinion is really good, well packaged, very relatable to us office workers. The drama that is presented is also proportional, to taste, not made up. No romance-story at all, no physical contact at all. Safe.
This is an old 2014 drama that I watched late, hehe. This 20-episode drama is based on a webtoon of the same title by Yoon Tae Ho and aired on TVN. The general theme is about office life/slice of life , something unique and different from the usual dramas.

Because this drama is too interesting for spoilers, I’ll just tell you at first. It is Jang Geu Ra (Im Siwan, idol boyband ZE:A) who since childhood has dedicated his life to practicing Go (a kind of board game popular in East Asia) for his dream of becoming a professional Go athlete. But his dream stopped when his father died, he had to work part-time to support living alone with his mother. Although it was too late for him to enter the office world, armed with a high school equivalency diploma, he tried an internship at One International, a well-known trading company in Korea through the connection of one of the higher-ups.

Well, in his age group, there are also several other interns whose qualifications and education are ‘more worthy’ to work in the company. They clearly ostracized Geu Ra, who is poorly educated and has no skills, not even English.

Long story short, after the final internship presentation, only 4 of the interns were accepted as permanent employees, namely An Young Yi, Jang Baek Ki, Han Seok Yul and Jang Geu Ra (only he has a 2 year contract status). This new kid gang then often gets together, even though they are awkward with each other.

In this story, it is not only Geu Ra who is constantly highlighted, not a classic from zero to hero story . Each character has a strong character and their own background that makes this story even more exciting. 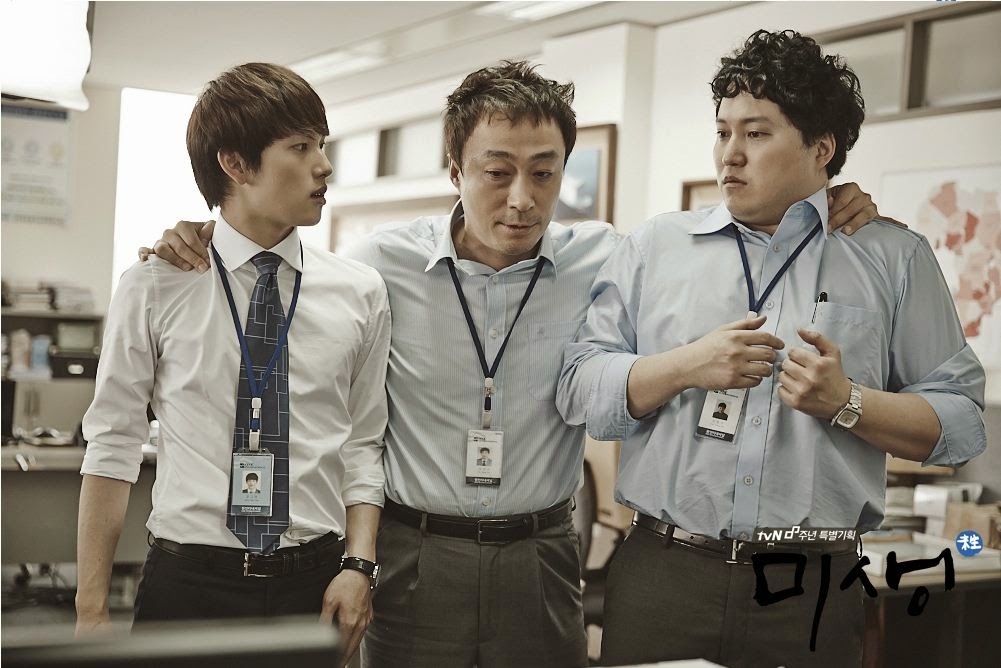 1. Jang Geu Ra (Im Siwan)
It’s in the paragraph above. Anyway, realizing that he is unqualified and late to start working at the office, Geu Ra tries hard to do the best he can. His workaholic manager hopes he doesn’t make it through the final presentation. But he was willing to be trained to even the smallest things; memorizing trading terms full of abbreviations, photocopies, writing meeting minutes and filing folders.

Geu Ra knows very well that he is not considered and belittled. The first words he asked his manager were, “because I don’t know, you can teach me, if you give me a chance.”

2. Oh Shang Sik (Lee Sung Min)
He is the manager of Sales Team Three, where Geu Ra works. Senior employees who are workaholic and have strong ideals. You could say that’s why it was so difficult for him to get a promotion. Mr. Oh is a nimble manager who likes to shout, but behind his uncaring attitude, he still thinks about the welfare of his subordinates.

Pak Oh is actually not happy with the way Geu Ra entered One International. He really hates KKN, including the projects he works on. Was advised by a fellow manager to often approach the same bosses for the sake of his career advancement, but Mr. Oh doesn’t care. He’s not a top licker.

Oh, how come this reminds me and my husband, I have three children, my wife takes care of the house, often comes home late so I don’t have time to do housework, but the position is stuck here and there,

3. Kim Dong Shik (Kim Dae Myung)
Mr. Kim, the deputy manager who is well built and has curly hair. Very favorite character. He acts like an older brother protecting a younger brother to his subordinates. His attitude is supportive, even though his own work doesn’t run out because his boss is a workaholic.

Before there was Geu Ra, there was only him and Pak Oh in the cubicle near the toilet. Dong Shik is very loyal to work for Mr. Oh and has no interest in moving to another team.

Mr. Kim’s contemporaries, there are Mr. Cheon, Mr. Kang, Mr. Ha, and Mr. Sung (a gang of deputy managers who used to start their careers as beginners too). Because of competition and workload, they just dwell on work and forget about friendship. There is one cocwiit scene where they finally have time to hang out together again.

Read More…
The Painter and the Thief
Run
You Are Not Normal, Either!
Tokyo Revengers
The Protege

4. Ahn Yong Yi (Kang Sora)
The only girl in the intern gang placed on the HR team. A multi-talented hard worker. Even though he was discriminated against because he was a woman, he persisted by receiving unfriendly treatment from his teammates. There is a family need that makes him have to continue to work, so he doesn’t want to give up even though he is repeatedly scolded by male bosses.

Young Yi is not the typical sad and innocent female character like in other dramas. He appears as a smart and humble employee. It’s really sad when I see her boss nagging while pointing her head, it hurts too much. But Young Yi is very tough and in the end can prove that women can work as well as male employees.

5. Jang Baek Ki (Kang Haneul)
The German graduate of this prestigious university has a competitive and prestige attitude, usually smart people. He does not accept being given unimportant tasks such as managing goods in the warehouse, correcting sentences and tidying up excel files. His mentor is cold and strict, to the point where Baek Ki wants to give up and apply to another office.