As a Beyond Evil viewer who really likes the story, I am happy that BE was able to win the best drama award at the 2021 Baeksang Arts Awards yesterday. Fyi, Baeksang Awards is a kind of South Korea’s Oscar, right. So it’s the most prestigious award for the Korean entertainment industry.

In fact, apart from being the Baeksang winner in the best drama category, BE also won the best actor and best scenario trophies. Several other players were also nominated for best supporting actor and new actress . 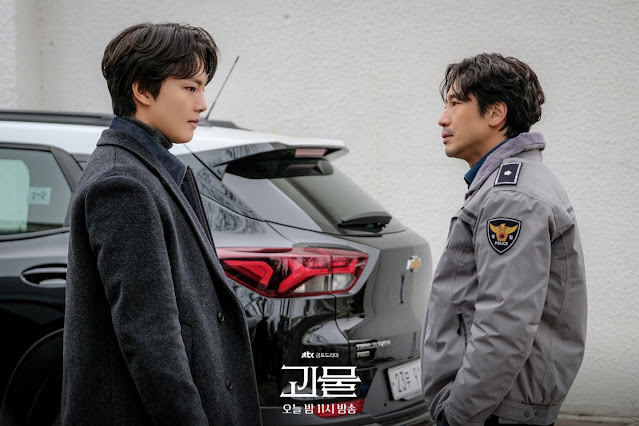 The next scene then moves to the scene 20 years ago in Manyang, a small town that is quiet and calm. Lee Dong Sik and Lee Yu Yeon are twins who are often compared to their parents. Dong Sik (Shin Ha Kyun) is indeed not as sweet as Yu Yeon, who is the ideal son-in-law.

Some time later, the body of a cafe owner is found in the fields, along with Yu Yeon’s disappearance one night. Yu Yeon’s fingers are then found lined up in Dong Sik’s yard. Making his mother hysterical and traumatized until Dong Sik grows up.

The scene returns to the present, 20 years later since the incident of Yu Yeon’s disappearance. Lee Dong Sik is a police officer who works at the Manyang Police Station in Munju City. His life has been relatively calmer, he does his patrol duties well and knows the legal basis for his every action.

One day, a young detective from the center admitted to being transferred to the Manyang police station. Han Joo Won (Yeo Jin Goo) is not an ordinary police officer, everyone at the police station knows him. He is the son of the Korean Police Superintendent candidate (sort of commissioner general, eh?), who previously served in the foreign affairs police.

By the police chief, Joo Won is then paired with Dong Sik. Despite being incompatible and cold to each other, the two of them carry out patrol duties all the way to the fields and rescue an elderly man.

Throughout his duties in Manyang, Joo Won always wore a sour face and liked to gas. Apart from perhaps being urban and OCD, his life is full of prejudice and suspicion of everyone in Manyang.

One day, a serial murder case appears again in Manyang. The pattern is similar to what happened 20 years ago for Dong Sik’s twin, leaving a trail of 10 finger pieces arranged at the crime scene.

Dong Sik is disturbed. He’s starting to go crazy again and is determined to find the criminal who killed his sister, as well as the one who got him slandered 20 years ago.

Departing from different suspicions, Dong Sik and Joo Woon conduct searches with their own methods. I really salute the implementation used by these two police officers in the investigation. Everything is thought out logically, according to the realm of law.

Although Dong Sik is often misunderstood by people as a crazy cop or a psychopath just because he’s emotional, he puts things in line. Lee Dong Sik does look emotional, even though he is the most rational compared to others.

Joo Woon, on the other hand, is almost never seen smiling. For him, being suspicious and wary of everyone is the best way for him to remain neutral and objective.

Everyone does keep secrets from the past in Manyang but they keep it close to each other. Police gang Manyang – Munju, often gather in a diner. Even though they were suspicious of each other, they acted as if it was nothing.

Until finally the truth is revealed one by one.

We can learn from Joo Won, that instincts are often right. But as a law enforcer, he must be able to prove his suspicions in a legally justified manner as well.

Saluuuuttt really the same as these two police officers who act according to their authority. Dong Sik may lash out at the perpetrators of his sister’s murder, but no matter how angry he is, he follows the logic of the law and can use

Starting from the capture of the serial killer in the middle of the episode, which turns out to be not the end of the story. From there, other cases were opened little by little, interrelated, and rooted in an incident involving important people. In short, a petty crime when covered with other crimes in a structured and systematic way will become an endless vicious circle.

In the end , everyone gets rewarded for their actions. Punishment is imposed according to the guilt. Defects in the body of law enforcement agencies are eradicated. The rule of law gets its authority.

What is interesting?
This drama is not a kind of psychopathic serial killer , which throughout the duration from beginning to end we guess who the culprit is. Actually, the clues have been seen from every episode, we just need to assemble and join in the fun because the parties involved are difficult to touch with the law.

In contrast to the drama on the topic of revenge a la Taxi Driver or Vincenzo, who tend to no longer believe in the law, in this drama we are educated to entrust conflict resolution to the law.

If there were police officers as strong as Dong Sik and Joo Woon in enforcing the law, the public would feel very protected. Because in the constitution, everyone is equal before the law, no citizen is above the law.